Charities have united to highlight brachy health issues in cats and rabbits; it’s NOT just dogs we need to worry about.

In recent months the issue of health problems in short-faced or brachycephalic dogs has been highlighted to the public, in the media and following high profile events like this year’s Crufts. This week however, three major animal welfare charities have united to send the message that this problem is not limited to dogs alone.

International Cat Care (iCatCare), the Rabbit Welfare Association and Fund (RWAF) and the RSPCA have come together to raise awareness that breeding cats and rabbits with exaggerated flat faces can cause health and welfare problems, as in dogs. 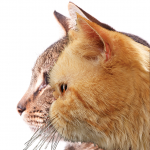 A brachy cat next to a normal one.

Short-faced cats like Persians can have all the same issues as dogs – breathing and dental problems, skin fold infections and problems giving birth to name a few. Claire Bessant, chief executive of iCatCare, said,
“It is very depressing to see the life which has been deliberately dealt to some breeds of cats because of a human desire to develop a certain look. I urge cat lovers to speak out and help others to understand that this is not something we should be doing to cats, and not something we should be tolerating. One of the best and most beautifully naturally designed animals – the cat – would not normally have any of these problems; we have created them through selective breeding. We should not be encouraging people to breed these cats by calling them ‘cute’, by being amused at their facial characteristics, or by the fact that they snore – rather we need to understand that this is human intervention that is wholly detrimental to the welfare of the cats and is simply cruel. International Cat Care takes an ethical view of all cat breeds and our website outlines the problems that exist for some breeds, including very flat-faced cats in the Persians and Exotic breeds. Our stance is that we should never deliberately breed cats for any feature or characteristic that impairs their welfare.” 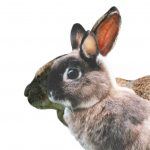 A brachy rabbit next to a normal one.

Sadly, rabbits have also fallen foul of the human desire for shorter, ‘cuter’ faces.Richard Saunders, head vet at RWAF, said,
“Breeds like the Netherland dwarf and the popular Lionhead breed have become more and more brachycephalic. In rabbits this is disastrous. Rabbits’ teeth grow continuously throughout their whole lives and must line up exactly to wear down evenly. The short face means the bottom jaw is longer than the top one, just the same as in bulldogs and pugs and the teeth do not line up. Teeth soon overgrow causing chronic pain, lacerated mouths, abscesses and in many cases death. The tear duct is also distorted (as it is in brachycephalic cats) and the rabbits often have tears and even pus overflowing onto their faces. Hand in hand with the short faces come the lop ears, rather than the wild, natural upright ears. These rabbits have a high level of middle ear infections and can’t communicate with other rabbits normally, leading to behavioural problems.
We would like to see an end to selection for “cute” faces and lop ears, and to preferentially breed rabbits with a more “wild type” face shape, which is associated with far fewer genetically induced diseases.” 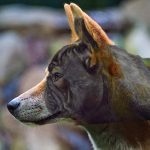 A brachy dog next to a normal one.

RSPCA dog welfare expert Lisa Richards said:
“Dogs who have been bred to have short, flat faces often have narrow nostrils and abnormally-developed windpipes. They can suffer severe breathing problems and many have difficulty enjoying a walk or playing.
The RSPCA believes there is still much to be done to protect the future health of dogs and that all those who breed dogs should prioritise health, welfare and temperament over appearance when choosing which animals to breed. For help when choosing a dog, please use the RSPCA/AWF Puppy Contract and if you’re worried about the health of a particular puppy, contact a vet for advice.
We are very concerned that these issues are now being seen in other species and would urge everyone concerned, from breeders to buyers, to do what they can to reduce the demand for such extremes.”

And as for me, as a vet and long-time brachy campaigner, a patron of RWAF and an ambassador for iCatCare, I say this,
“It’s been over 100 years since the first veterinary paper on the problems of brachycephaly in dogs. We MUST learn from what we have done to these animals and stop it in other species right now. These charities are world leaders in welfare science and the fact they have united to highlight this issue speaks volumes. I hope people listen.”