Lacy, put to sleep simply for how she looked.

The Dangerous Dogs Act that came into force in 1991 was and remainis one of the most pointless laws we’ve ever had. Of course some dogs are capable of inflicting more damage than others due to size and strength but the notion that you can say that all animals of a certain breed are dangerous is simply ridiculous. Ask any vet.

In my surgery I would be more wary of a Jack Russell or a border collie than a staffie! I’ve also been attacked by several absolutely savage cocker spaniels, Labradors and golden retrievers. The fact is that dogs’ behaviour is dictated by so many factors beyond their breed. If we had used the last twenty odd years using the law to make people better dog owners it would have been a much better use of the law.

In that time thousands of dogs have been taken from their families, kept for inhuman periods of time in isolation in some cases and then destroyed. Having never attacked a human in their lives. How is that justifiable? If you have a dog, any dog, imagine how you would feel if someone arbitrarily decided it should be destroyed for no reason. You would be absolutely heart-broken.

There are many countries where by law people have to prove they are capable of looking after a certain pet. They need to prove they have completed a course to that effect or prove existing knowledge of the animal. In some countries owning a dog is an expensive business due to taxes or licenses. These are sensible measures. Promoting and enforcing good breeding practices and the proper socialisation and habituation of dogs from a young age is sensible. Killing dogs willy-nilly because they look a certain way smacks of something else more sinister altogether.

The most ludicrous part of the law is the fact that Pit Bulls, the dogs it really demonised, aren’t even a breed, they are a type. From the minute the law was introduced the police, dog wardens and vets alike were totally confounded by even defining what a Pit Bull is! Do large staffies count? Do small mastiff crosses count? What is it? Who decides? Add to this the fact that there are many pit bulls living happily and safely in homes without any issues because they have responsible owners and have been habituated and trained.

The whole thing has been a mess for far too long and the time has come for the law to be repealed and for the politicians to try and do something constructive to improve the lives of dogs and reduce bite injuries. We need to get rid of puppy farms where socialisation and habituation is non-existent and welfare is dreadful. We need to look carefully at who owns dogs or wants a dog. Having an animal is a privilege, not a right and more needs to be done to make owners better equipped before the animals are even acquired.

The RSPCA has a petition you can sign to show your support for this campaign to end BSL so please sign if you feel the same as I do. 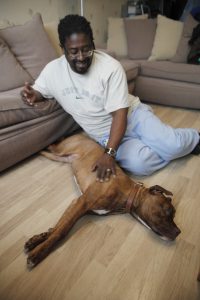 Mason was going to be euthanased but his behaviour was so good when he was assessed that he was excused.