Most people have heard of foie gras and many people are aware that it has a poor reputation when it comes to animal welfare but recently I learned much more about its production because of a new campaign. The charity Animal Equality are pushing for a ban on importation of this product on ethical grounds. The production of foie gras is banned in the UK but we still allow sales and importation of the product itself. So what is so bad about it?

Foie gras is the fattened liver of geese and, much more commonly these days, ducks. It is seen as a delicacy in many countries and in France, the main country consuming it, is a party food especially at Christmas and New Year. In the UK it is sold in high end stores and restaurants and seen by many as a real treat. The fact is though that for the animals concerned it is far from a treat and is prolonged suffering, disease and injury.

The chicks are sorted by sex as they hatch and the females are either crushed to death or burned to death immediately. Apparently they do not grow big enough to be profitable to rear. The males are raised as normal poultry for the first few weeks to months in varying conditions depending on the system. Then comes the gavage period.

Gavage is force-feeding and is banned in many countries worldwide. For this period of 12-15 days the ducks and geese are placed in cages, some that hold a few together, many that are tiny, single animal crates that do not allow the slightest movement. Then, usually twice a day, they are force fed enormous quantities of grain and sometimes extra fat. The amounts given increase over the gavage period. This huge volume of food produces an enormous, swollen, fat-filled liver. The liver becomes 7-10 times larger than normal and can be so heavy that the animals are unable to stand.

The swollen organ makes them over heat and they pant constantly to try to cool themselves down. Many are on the verge of liver failure and death and the mortality rate is 5-10% higher in the gavage period than normal. In fact if they were gavaged for even a few days longer the mortality rate rises sharply. The procedure balances them on the edge of death until slaughter.

The gavage tube is very large and many birds suffer oesophageal tears and ulcers, broken beaks, and facial injuries from the handling and gavage as well as the diseased liver. The barren cages cause foot injuries and the struggling to escape capture or simply turn around results in broken wings and legs, many of which are left untreated until the birds eventually die.

Those surviving the hell of gavage are slaughtered and their massive livers taken to sell as a highly-sought after delicacy. It’s absolutely indefensible to produce something at such a cost to the animals’ welfare. For extensive periods not a single one of their welfare needs are met and most of those needs are being undeniably neglected at best.

I live in France and there is a growing movement here to ban the production as well with many celebrities and charities campaigning against it. It is seen by some as a great French tradition but now more and more it is being seen as a national shame. Some producers will tell you that in migratory birds like geese a fatty liver prior to migration is normal so it’s all fine. It’s a barely-veiled lie. Those that do migrate have livers about twice the normal size, not 10 times larger. These birds would not be able to fly with this bloated organ. The most damning fact against this argument is that around 90% of the animals used these days are non-migratory species.

I am totally opposed to Brexit but if leaving the EU gives us some power to improve animal welfare then I see that as a definite silver lining to a very black cloud. If we find the production of something unethical on welfare grounds we simply can’t defend the sale of it. I find it almost more underhand. We show ourselves as a higher morality nation, proudly saying that we do not produce foie gras while sliding it in under the moral radar and reaping the profits. We are complicit in the suffering of millions of birds. If you support a #FoieGrasFreeGB please sign and share Animal Equality’s petition. 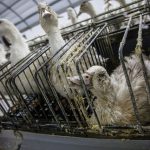 Totally inadequate cages cause many injuries 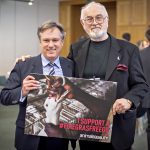 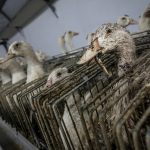 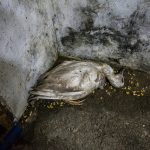 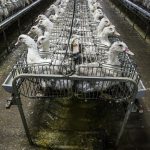 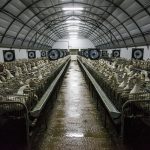 None of the birds’ welfare needs are met in this time